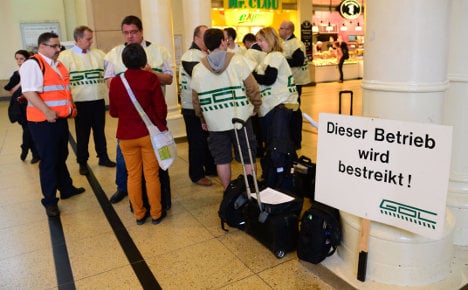 GDL members picketing in Hanover during a 'warning strike' in September. Photo: DPA

In a statement released with its letter last week, DB head of human resources Ulrich Weber said that the GDL was being “completely counterfactual and absurd” in its public statements about the negotiations.

The union claimed that by calling for wage negotiations to be suspended “until the legal situation is clear,” DB was using the talks as a pretext to ask the government to intervene and standardize wages in the rail sector.

They also claim that workers need protection from excessive overtime due to understaffing and better conditions, as well as demanding a five percent pay increase and reducing their work week by two hours.

With train drivers who voted last week 91 percent in favour of strikes, GDL said it would call on members to walk out “in the coming days”.

This would be the third walkout since early September in a battle over wages and a tug-of-war over who can represent which union members between GDL and the larger Rail and Traffic Union (EVG).