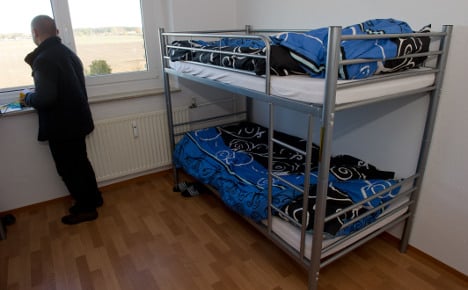 A man in a refugee centre run by European Homecare in 2012. Photo: DPA

Westdeutsche Rundfunk journalists said that workers they spoke to at other security firms committed the violent assaults against people in their custody with the knowledge of the head office.

“We even got stuck in ourselves sometimes,” one unnamed guard told news broadcast Westpol.

Guards in one refugee centre in Burbach were reportedly nicknamed 'The SS' after Hitler's stormtroopers because of their violent behaviour and far-right as well as sometimes criminal backgrounds.

The firm also provided suggestions for appropriate punishments for those held in the refugee centres. One group of people in the Optipark centre in Essen were locked out of their rooms.

European Homecare, which was paid by the government of North Rhine-Westphalia to manage the refugee centres, did not immediately respond to the allegations.

It had previously released a statement saying its leaders were “stunned and shocked” by the abuse committed by their employees.

The company has responded to the crisis by firing the subcontractor it gave responsibility for its security contracts, which had itself sub-contracted the work to a third party.

Police are investigating 11 of the guards provided to refugee centres by European Homecare.

SEE ALSO: 'Criminals are at work in refugee homes'