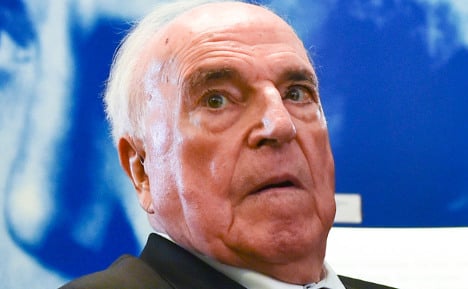 Focus reported that Kohl suspects Heribert Schwan, the former CDU president and Kohl's former biographer, of using recordings of their conversations while preparing the book, which is to appear on Wednesday.

In August a court forbade Schwan to use the more than 600 hours of tapes, which were made in 2001 and 2002, after Kohl brought a first case against him following a falling-out in 2009.

Spiegel reports that Kohl had harsh judgements to mete out to those now at the head of his party and the country, targeting Merkel and former President Christian Wulff.

"Frau Merkel couldn't even eat properly with a knife and fork," he reportedly said, while he called Wulff a "betrayer" and a "zero".

Kohl also hits a historical nerve by suggesting that popular resistance to the Communist regime was not the most important factor in the “Peaceful Revolution” in the German Democratic Republic (GDR) in 1989.

Instead he believes that the economic weakness of the Soviet Union at the time created the conditions for the end of the regime, the fall of the Berlin Wall and the reunification of Germany.

"It's totally wrong to act as if suddenly the Holy Spirit came over the squares in Leipzig and changed the world," he said.

"Gorbachev took a look at the books and realized he was out for the count and the regime couldn't keep going."

Kohl's case against Schwan will be heard in the Supreme Court.