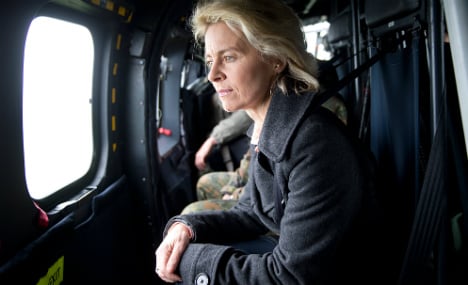 The report by KPMG, engineering firm P3 and law firm Taylor Wessing is set to be released on Monday.  It outlines 140 problems and risks with the current major operations of the Bundeswehr (German military). Von der Leyen, from Chancellor Angela Merkel's centre-right Christian Democrats (CDU), requested the investigation herself after being unhappy with internal audits.

In past weeks, the Bundeswehr has fallen victim to the shabby state of its equipment when aid to Ebola-hit West Africa and a much heralded weapons delivery to the Kurdish province of Iraq was delayed because of faulty planes.

Von der Leyen told broadcaster ZDF on Saturday that in light of the report, her mission now is to balance the retrofit of the Bundeswehr with her plans to expand the military's presence.

On Friday, the defence minister outlined plans for the expansion of the Bundeswehr's international engagement. As well as a training mission in Iraq, von der Leyen hopes to send German reconnaissance drones to supervise ceasefires in the Ukraine conflict.

The centre-left Social Democrats (SPD), whose leader, Frank-Walter Steinmeier is Germany's Foreign Minister, say the CDU politician is overstepping her authority with these plans.

"I'm under the impression that the Minister is jumping the gun here, without any international vote and without considering any legal requirements," SPD defence specialist Rainer Arnold told the Saarbrücker Zeitung on Monday. "One does not take on more responsibility on issues not yet discussed by parliament or the public." The Süddeutsche Zeitung on Monday reported that the audit calls for a careful decision regarding the €4 billion Meads as a successor to the aging Patriot surface-to-air missile system, citing "too many unanswered questions".

It also recommends reviving the scandal-plagued armed drone "Euro Hawk", on which development stopped in 2013. "We have to make this thing a success," Arnold told the Rheinische-Post on Monday.