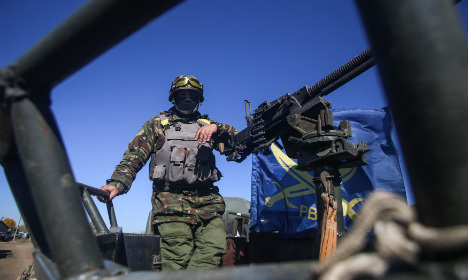 A Ukrainian soldier near the eastern town of Debaltseve. Photo: DPA

The convoy should arrive in mid-October and on October 14th Cooperation Minister Gerd Mueller is also expected to head to the city of Kharkiv, which remains under government control.

The goods being transported are estimated to be worth €10 million ($12 million) and more goods will be bought in Ukraine.

"We want to send a signal of solidarity. The people of Ukraine can count on us as a reliable partner," Mueller said.

"We want our contributions to reach the numerous Ukrainian families that are in need and suffering so that they are equipped to withstand the winter," he said.

The truck convoy, which is being accompanied by Polish police and fire services, will cross the Polish-Ukrainian border early Tuesday, the German government says.

Meanwhile, a third Russian aid convoy arrived in the eastern Ukraine area controlled by pro-Moscow separatists, a Russian official said. Ukraine has criticized Russia for sending convoys across its border without prior permission.