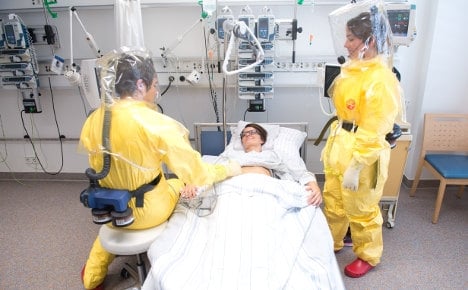 "The patient is an employee of an Italian NGO, he has Ugandan nationality and has worked as a doctor in Sierra Leone," said Stefan Gruettner, social affairs minister for the Hesse region where Frankfurt is located.

"He worked over there with people affected by the Ebola virus and was infected," he told Hessische Rundfunk radio station.

The next three days will be decisive, he added, saying the treatment would last "two to three weeks".

The patient arrived on a special flight on Thursday night under tight health precautions and will be placed in an isolation unit at the hospital.

"The patient will be treated in a separate building," the hospital said in a statement, adding that it would not provide information on the evolving state of his health.

Another victim of the virus — a Senegalese expert with the World Health Organization, also infected in Sierra Leone — has been hospitalized in the northern port of Hamburg since the end of August. No information on his current state has been released.

Ebola has so far killed 3,338 people out of 7,178 infected, most of them in Liberia, Sierra Leone and Guinea, according to the latest figures from WHO.

There is currently no vaccine or treatment for the virus which is spread by contact and the exchange of bodily fluids.