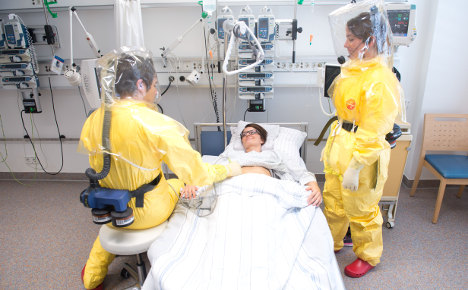 But the health worker is in such critical condition that it's not certain he will be able to make the trip, a spokeswoman for the Hesse ministry of social affairs said in Wiesbaden on Thursday.

Bild reported that the man is a Belgian paediatrician who had been working in Sierra Leone.

A University Clinic spokesman confirmed that they were prepared to receive the patient.

Germany received its first Ebola patient from West Africa on August 27th at the University Clinic in Hamburg.

The government has also pledged to help affected countries with medical aid and air transport.

But one of two German transport planes sent to West Africa last week broke down and had to stop on the island of Gran Canaria.

It has now been replaced in the Senegalese capital Dakar by a third plane, which also dropped off engineers on the Spanish island to fix the technical problem.

The faulty aircraft will be repaired and return to Germany, a military spokesman told The Local on Thursday. The two planes in Dakar have delivered equipment and personnel to load and unload further aid flights and will provide logistical support for aid efforts in the region.

However, the aid Germany promised to virus-stricken countries such as Liberia earlier this month has yet to be delivered, the spokesman added.

More than 3,300 people have died so far in the outbreak of the deadly virus.