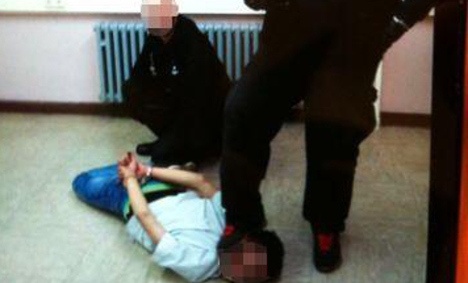 Speaking anonymously to his local paper, the Siegerlandkurier, the man, who was a security guard at a refugee centre in Burbach, said there was a “legal vacuum”, at the former barracks which houses 700 people.

Refugees were constantly abused and security guards were overworked. The man added that some of his colleagues "clearly" had a far-right background.

Groups of guards, who looked for refugees flouting rules against smoking and drinking, were named internally after the SS, he added.

The guards also had a special room for refugees who caused them difficulties, known as the “problem room”. It was furnished only with mattresses and refugees would have to spend eight hours locked inside without access to a toilet.

Photos released of the abuse have been compared to Abu-Ghraib and Guantanamo Bay. One video shows a refugee being forced to lie in vomit on a mattress.

Another photo shows a man from Algeria bound by two security guards with one of the guards' boot on his neck.

Some of the guards being investigated had criminal records and North Rhine-Westphalia’s interior minister Ralf Jäger announced on Tuesday that all security workers would face more stringent tests.