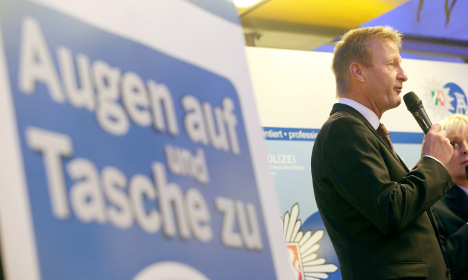 Ralf Jäger in front of a sign reading "eyes open and pockets closed" at the pickpocketing awareness event. Photo: DPA

Daniel Danger, a reporter for Westdeutsche Rundfunk, brought along the magician to inadvertently help the minister illustrate his point at the Essen event.

“He had three bodyguards, real big guys with mean expressions,” he told the host of the 1Live news. “I had someone on my side too, my friend Giovanni, who I presented as my technician Handsy.”

While Danger plied the minister with questions about how people should protect themselves against pickpockets, Giovanni replaced the mobile phone in the minister's jacket pocket with a dummy version.

“You can get distracted faster than you think,” Jäger was saying as the light-fingered "thief" went about his work.

Asked if even he could be pickpocketed, Jäger was confident in the abilities of his bodyguards.

“Their mouths were hanging open,” after the trick was revealed, Danger said.

“That shows how quickly you can become a victim, how easily a distraction can make you not expect anything to happen,” a rueful Jäger said. “You just distracted me too much.”

Giovanni went on to steal valuables from a number of policemen and journalists at the event. The valuables were later returned.