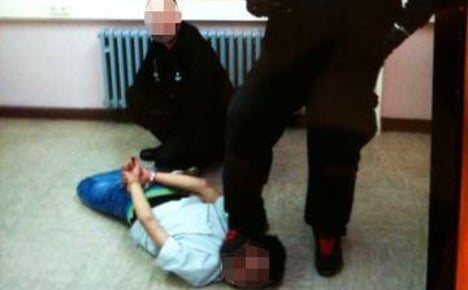 Police released a mobile phone photo of two uniformed guards at a facility in the town of Burbach, North Rhine-Westphalia, standing over a 20-year-old man from Algeria.

One of the guards has his booted foot on the man's neck. He is lying on his chest with his hands cuffed behind him.

Frank Richter, police chief in nearby Hagen, compared the alleged abuse to that suffered by inmates in Guantanamo Bay.

“These are pictures which we would normally associate with Guantanamo. This behaviour makes me very concerned," he said in quotes reported by the Westdeutsche Allgemeine Zeitung.

Local authorities in Arnsberg announced they had cancelled the contract with the security firm whose employees were responsible for the accommodation at the former barracks.

A different company has been in charge since midnight on Friday.

“We're sending a clear signal to the companies we pay to protect people in these reception facilities,” district president Gerd Bollerman said in a statement on Sunday.

“Anyone who employs criminals who commit crimes against asylum seekers and bullies them will be got rid of.”

The district also released a seven-point “emergency programme” to protect people in the reception centre. The German Police Union (DPolG) blamed the violence on the government's outsourcing of reception centre security.

“This is the consequence of the privatization of state functions,” DPolG president Rainer Wendt said. “The jobs end up at sub-sub-contractors with shady employees.”

In future only people who have passed a criminal records check and other tests will be allowed to work at refugee facilities, an Arnsberg district spokeswoman told ZDF television on Sunday evening.

Police have already questioned more than 100 refugees at the site about the abuse out of the 700 living there.

Prosecutors and police are investigating four suspects and following up leads on further cases of abuse.

They said that they have evidence of other incidents involving security guards. Some were found to have forbidden weapons such as truncheons.

The trigger for the probe was a video given to investigators by a journalist on Friday. It shows a refugee being forced to lie down in his own vomit.

Police later found the released photo of the Algerian man being abused on the phone of one of the suspects.

TV broadcaster Westdeutsche Rundfunk (WDR) reported on a further case of violence against another asylum seeker at a reception centre in Essen. Investigations have started there into three allegations of grevious bodily harm.

Journalists said that they had a copy of a medical report detailing the man's injuries. That reception centre is run by the same security firm which was in charge of the Burbach facility, Nuremberg-based firm SKI Security.

The Burbach reception centre is managed by an Essen-based firm called European Homecare which says on its website it has 20 years experience in managing accommodation for asylum seekers.

European Homecare subcontracted security to SKI and police are investigating SKI employees in both Burbach and Essen.

According to WDR, two of the four security guards being investigated for abuse at the Burbach site were known to police for past offences including bodily harm and drug offences.

But SKI said in a statement on Monday that all of its employees were qualified and vetted in accordance with national guidelines.

"The reported incidents are vile. We are supporting the police and prosecutors who are investigating the identified suspects," the company said.

European Homecare CEO Sascha Korte said on Monday the company was "concerned and shocked" that such abuses could have happened.

"I'm stunned and ashamed that such assaults have taken place," he added.

European Homecare has terminated cooperation with SKI, it said in a statement.

The government in Berlin got involved in the case on Monday.

Chancellor Angela Merkel’s spokesman, Steffen Seibert, said: “If what is in these images in confirmed, if refugees are being mistreated and degraded, then it would be a sickening act.”

“Anyone who threatens and victimizes people in need must be punished severely.”

The former barracks in Burbach has been the scene of violence before. In November last year, police were called to reports of a mass brawl on the site involving up to 100 people.

SEE ALSO: One dead, one injured in asylum home fight