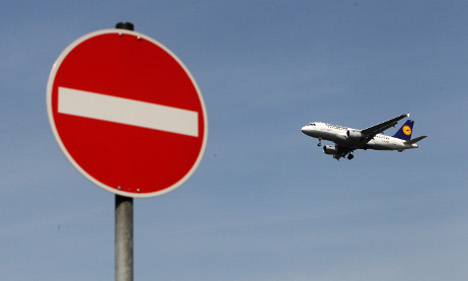 The walkout on Tuesday will affect around 56 long-haul flights at Germany’s biggest airport, Frankfurt, and last from 8am to 11pm, union Cockpit announced.

The strikes are part of a long-running dispute over pilots’ pensions and retirement provisions.

Cockpit said in a statement on Monday it was “forced” into the action because of the failure of Lufthansa’s management to offer a compromise.

Lufthansa said up to 56 flights from Frankfurt could be affected by the strike.

"We can't say at this point exactly how many will actually be cancelled," a spokesman told AFP.

"We also have long-haul flights leaving from Düsseldorf and Munich and these won't be affected," he said.

"We're doing all we can to ensure as many flights as possible can actually take off. We're currently working on a contingency timetable, which we plan to publish in the next couple of hours," the spokesman added.

The strikes are the fourth set of walkouts in the past few weeks and the fifth this year.

And the second walkout a week later affected domestic and regional services landing at or taking off from Frankfurt and the third stoppage targeted Munich airport, Germany's second-busiest air hub.

Lufthansa pilots can currently take paid early retirement from the age of 55.

They are fighting a plan by the airline to raise the minimum age and to involve pilots in the financing of their pensions.