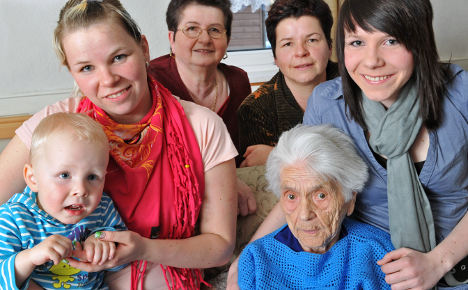 "She passed away peacefully in her sleep," Szwillus's granddaughter Heike Groschup told the Chemnitz Freie Presse on Wednesday. "We were with her to the end, that was important to us."

Szwillus was born on March 30th, 1902. She still lived with Groschup, a nurse, and her family until her death on Sunday, though suffered from severe dementia at the time of her being named Germany's oldest woman in April of this year, soon after turning 112.

The resident of Raschau-Markersbach, Saxony, once told the Sächsiche Zeitung that the secret to longevity was a daily breakfast of rolls spread with butter and jam (never margarine), as well as a hearty helping of goose fat at Christmas.

Groschup said her grandmother loved to tell the tale of the one time she waved to the Prussian Kaiser Wilhelm II as a young girl. Great grandchild Laura said she loved to be photographed, even though her eyes no longer worked so well. She was married twice and had one child of her own from her first marriage and three step children through the second.

Her nurse at the care home where she lives said on Wednesday that Klink is determined to make it to see her next birthday in January.

"If Hannchen says she'll be 112, then she will be 112," Silvia Ihm told the Oschatzer Allgemeine Zeitung at the time of Klink's 111th birthday.

Ihm told reporters on Wednesday that her charge is still relatively fit and is aware of her new status as Germany's oldest living woman.