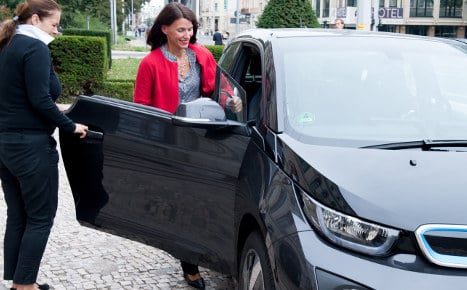 Very few Germans own electric cars and the government hopes that the new Elektromobilitätsgesetz will change that.

Now municipalities have the responsibility of implementing the law, but are balking at the incentives the federal government is offering.

Many cities, including Hamburg, Berlin, Munich and Stuttgart, have already spoken against sharing the bus lane, calling the idea "counterproductive" (Berlin) and "not an option" (Stuttgart) said a Spiegel report last month.

In passing the law, the government forewent bonuses for electric car buyers and instead made more funds available for research and development of electric cars.

Despite their car-crazy reputation, Germans have lagged behind other Europeans in adopting electric vehicles. In the first six months of 2014, it was recorded that there were four electric cars for every 10,000 standard fuel-driven ones on the road.

For comparison, there are 10 electric cars for every 10,000 standard fuel-driven cars on French roads.

According to the Frankfurter Allgemeine Zeitung, Germans say they are held back not by the idea of electric cars, but by limited selection of electric cars, high prices and limited infrastructure such as charging stations.

Five years ago, Chancellor Angela Merkel's government set the target for one million electric cars on the road in Germany by 2020.