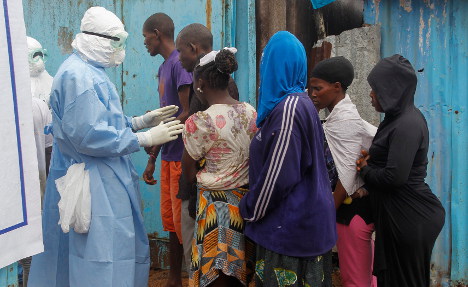 "This is an incredible display of willingness to help. Germany can be proud of that," von der Leyen said to the Bild newspaper in an interview published on Wednesday.

On Monday, the Christian Democratic (CDU) politician announced that the Bundeswehr would be sending a force to help with the Ebola plague, adding that only those who said they wanted to go would be sent.

Those going will first have to go through a special training for the crisis mission.

Von der Leyen has promised a financial bonus for those going and a clear end date to the mission. Anyone infected will immediately be sent home. Still needed are doctors and nurses, as well as technicians and logistics experts. The Luftwaffe, the German air force, will also be doing regular airlifts to the worst hit areas, as well as delivering a field hospital to Liberia that can house as many as 50 patients.

The health crisis in western Africa has been called the worst epidemic of the disease since its discovery in 1976. The World Health Organization has confirmed  5,800 cases and 2,800 deaths. The US Centers for Disease Control and Prevention said on Tuesday the actual numbers is probably 2.5 times more than what is officially known, adding that there will be about 21,000 total infections by the end of the month.

This outbreak has the potential to infect as many as 1.4 million people in Liberia and Sierra Leone by the end of January, the CDC said in a worst-case statistical analysis. However, the report added that a quick response in the coming weeks could stem the outbreak.