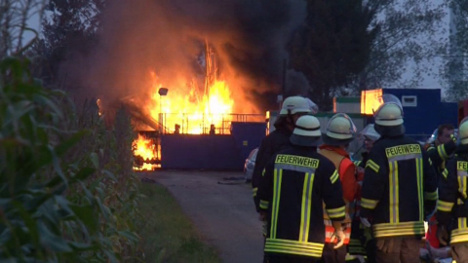 Police said that seven men were performing maintenance and repairs on the drilling rig in Osterbrock when the gas leak occurred at around 7.10pm.

The four injured men were closest to the site of the explosion and suffered extensive burns.

Ambulances and a helicopter were deployed to bring the men to nearby hospitals. They were transferred to specialist burn clinics in Dortmund, Gelsenkirchen, Hanover and Hamburg during the night.

Around 120 firefighters with 12 fire engines were deployed to the scene, the Neue Osnabücker Zeitung reported, as well as members of the Red Cross and Technisches Hilfswerk volunteer rescuers. They were still fighting the blaze at 8am on Wednesday.

“The fire is under control, but there's still gas that needs to be burned off,” a police spokesman told The Local.

Members of the Lower Saxony Office of Mines, Energy and Geology (LBEG) are on the scene to investigate the cause of the explosion.

The well itself belongs to energy company GDF Suez. The company said in a statement that it had activated its crisis plan and was working with the emergency services.