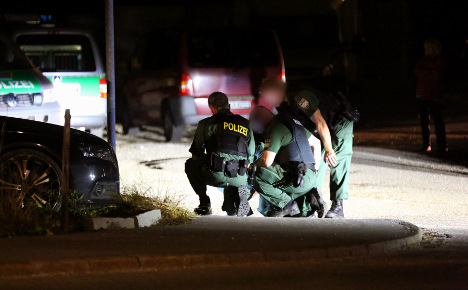 Police searching the area after the TNT discovery in Nußdorf. Photo: DPA

Police in Nußdorf in southern Bavaria were called to a house in the town's Sondermoning neighbourhood late on Friday after a 32-year-old man found the explosives in his garden.

The charge was defused and suspicion immediately fell on his neighbour – his father.

The suspected bomber was arrested without resistance as he returned home at around 11pm the same evening.

The district court in nearby Traunstein issued a warrant for his arrest on grounds of attempted murder, attempting to cause an explosion and breach of the law on explosives.

Neighbours, who had been evacuated from their homes while the explosive was defused, were able to return just before midnight.

Police told The Local that the father had been arrested but could not reveal his motives.

In a statement, they said that their search of the area had revealed new evidence which would be used in the prosecution.

An expert testimony is being prepared which will detail why the explosive did not detonate and what damage might have resulted if it had.