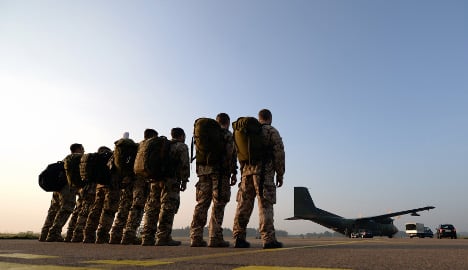 The seven trainers boarded their plane in Germany on Friday. Photo: DPA

The paratroopers were supposed to arrive in the Iraqi Kurdish capital of Irbil on Saturday to train Peshmerga forces ahead of a huge shipment of German military equipment.

But they have received no entry permit for Iraq, meaning they and their Transall transport plane are stuck in Bulgaria, a spokesman for the German military (Bundeswehr) confirmed to The Local on Tuesday.

The spokesman denied initial reports that the paratroopers' choice of plane was the reason behind the delay. The soldiers had to switch planes before take-off in Schleswig-Holstein last week because the one they were supposed to fly in had a punctured tyre.

It is unclear when the instructors will be able to continue their journey.

"We hope to have this sorted soon," the military spokesman said. "We're working around the clock to get it sorted and are optimistic."

The spokesman also played down the delay in Bulgaria. "It's not so dramatic as they were meant to stop over in Bulgaria anyway," he said.

He added that the Bundeswehr had been in touch with Iraqi authorities before the troops flew out and could not say why they hadn't been given permission to enter the country.

The Kurds were set to receive €70-million of used gear from the German military on Wednesday this week, including 4,000 G3 rifles, 4,000 P1 pistols, 20 MILAN anti-tank missile launchers, 120 anti-tank rockets and 20 MG3 machine guns.