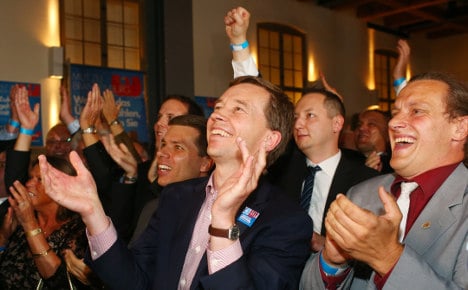 The news comes a week after the party broke the 10-percent barrier in state elections in Thuringia and Brandenburg, with scores of 10.6 percent and 12.2 percent respectively on September 14th.

The party's breakthrough was all the more striking as it was the first time its candidates were on ballots in those states.

Voters have flocked to the party despite its internal divisions over exactly what its policies should be.

AfD leaders are united over their desire to leave the Euro. But the party gathers under its banner free market capitalists as well as those in favour of some state regulation, pro-Russian as well as pro-Ukrainian attitudes in the Eastern European crisis, and many more seemingly incompatible positions.

The rise gives Chancellor Angela Merkel a political headache. Her centre-right union has left space open on the right for the AfD to take advantage of and the eurosceptics rise has spooked her pro-euro union.

Manfred Güllner of Forsa said that the AfD had particularly benefited from increasing political apathy.

"The proportion of radicalised AfD supporters among those willing to go out and vote gets bigger the lower willingness to vote is," he said. "Only a minority of seven out of 100 potential voters have sympathy for this party."

Support for the economically liberal Free Democratic Party (FDP) has suffered the most from voters switching their allegiance to AfD, with support for the party at just two percent according to the Forsa poll for Stern magazine.

Formerly the junior partner in Chancellor Angela Merkel's 2009-2013 coalition government, the pro-business FDP has lost all its members of the Bundestag and is disappearing from state capitals too.

It did not win enough votes in either Thuringia or Brandenburg to send representatives to their state legislatures.

Nine percent of voters supported the Left party nationwide, although it won 28.2 percent of votes in Thuringia and 18.6 percent in Brandenburg last week, reflecting the left-wing character of politics in the eastern states.

And the Green party gathered the support of eight percent of voters.