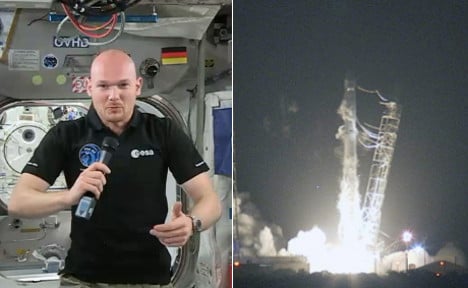 Gerst is waiting the arrival of the SpaceX Dragon which launched on Sunday. Photo: NASA TV/DPA

Gerst operated the Canadarm2, the 17.6 metre robotic arm, to capture the Dragon and bring it closer. NASA astronaut Reid Wiseman assisted him.

The operation to latch the vessel to the research outpost took about two hours.

The Dragon carried more than 2,200 kilogrammes of supplies and material for science experiments, including a tool to measure wind speed at the ocean's surface.

Looking forward to catching a #Dragon today with my own hands! #SpaceX4

The 3D printer is the first of its kind. Developed by US company, the ISS-bound version meets NASA's safety standards and is built to withstand the stresses of launch. This one is a technology demonstrator. A more industrial one is planned for next year.

It is hoped that one day, the astronauts aboard the ISS can print their own tools as needed, even without gravity to assist the process.

Hans Königsmann, vice president of mission assurance for SpaceX, told journalists that the latest vessel took off well. "Nothing like a good launch," he said. "It's just fantastic."

The spacecraft launched early Sunday from Cape Canaveral, Florida, and is SpaceX's fourth contracted mission with NASA for supply trips to the ISS and back.

The lab mice are the first live mammals to hitch a ride aboard a commercial cargo ship, and they are enclosed in a NASA-made research cage for studying the effects of weightlessness on their bodies.

The 3D printer is the first of its kind to demonstrate how the technology can be used in space, even without gravity to assist the process.

Gerst's last shipment included specially requested meals, like Käsespätzle (cheese noodles), lentils, sausages and a Semolina pudding. His most recent menu has yet to be released.