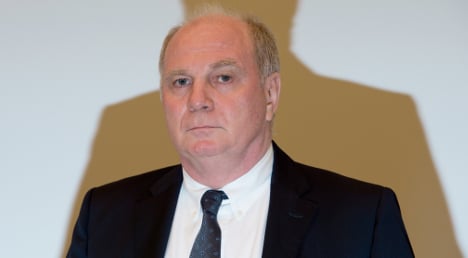 The tax offices of Miesbach, Bavaria, will have a record year after receiving €30 million in two payments from Hoeneß, thus settling the amount owing from his tax evasion conviction.

It is the largest payment made in one year by a private individual, according to the paper's report. In 2013, Miesbach took in a total of €600 million in taxes.

However, a spokesman at the office could not confirm to The Local that the payments had been made. "We do not comment on the standings of personal tax accounts due to privacy," he said.

The former player, who earned 35 caps for West Germany,  admitted to evading €28.5 million in taxes during a trial in March of this year. He was found guilty of seven counts of tax evasion, netting him three years and six months in prison.

What exactly he owed isn't known. While he's admitted to the €28.5 million, there is still the matter of a seven percent interest and it's unknown how many years he forewent paying his tax bill. The Süddeutsche said best estimates are around €40 million.

The former Bayern Munich president started his prison sentence on June 2nd, and his lawyer speculated that Hoeneß would only serve half of his 42-month sentence.

On Saturday the 62-year-old had his first day release from the Landsberg Prison where he is serving his time.

According to his lawyer, Hoeneß spent the day with his family at their home at the Tegernsee in Bavaria, 110 kilometres from the prison. It was there that he ate à la carte and enjoyed some hours of freedom, before returning to the prison 40 minutes before he was due back at 6.00 pm, said a report from Focus news magazine.

Hoeneß's life in prison has no doubt been an adjustment for the businessman, who now lives in a eight-square-metre cell and is awoken at 5.50 a.m. Before his admission, the former World Cup winner (1974) counted Chancellor Angela Merkel as his friend.