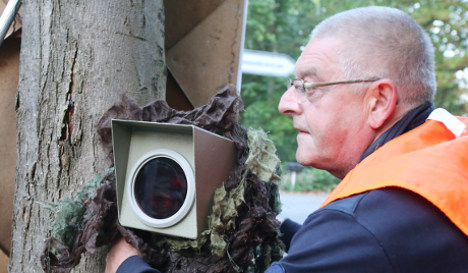 A camouflaged speed camera in Schleswig-Holstein on Thursday. Photo: DPA

The 24-hour clampdown on speeders, which involved 13,000 officers in all 16 German states, ran from 6am Thursday to Friday.

Results will be released on Friday, but police claimed drivers drove a lot slower than normally on Thursday.

Police in Berlin said they clocked almost 1,000 speeders in the first six hours of the marathon, including a motorist driving at 99 km/h in a 60km/h zone.

Berlin Police chief Klaus Kandt said: “Most drivers stuck to the limit and thus showed that it is important and right to bring speeding into the public eye.”

In North Rhine-Westphalia, the state which first initiated “Blitzmarathons”, schoolchildren were allowed to pick spots where they wanted the police to be and even have a go on the radar guns.

One pupil in Düsseldorf caught his own mum speeding, while other pupils clocked one of their teachers driving too fast.

The officers took up position in 7,500 spots in Germany to catch speeders.

It was the second operation of its kind in Germany. During the first “Blitzmarathon” last October, 83,000 drivers were caught.

The action came weeks after figures showed the number of deaths on the country's roads had increased for the first time in decades.