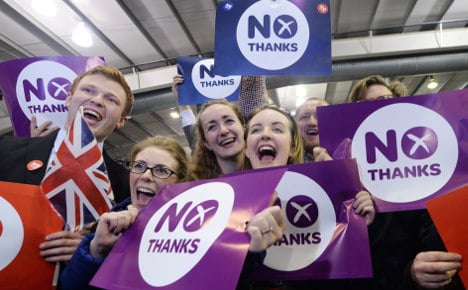 'No' campaign supporters celebrate in Edinburgh after the results were announced. Photo: DPA

The Scottish referendum dominated German media on Friday, as Germans had been apprehensive for the European consequences of a possible "Yes" vote for Scottish independence. The result is also set to lead the UK to a more German-model of government.

Scots voted to stay in the union by 44.7 percent to 55.3 percent, but the strong showing for the "Yes" campaign led German news sites and commentators to wonder about the consequences for Brussels and for other regions of Europe with strong independence movements, such as Catalonia.

"The result of the vote can only have one meaning," Foreign Minister Frank-Walter Steinmeier told journalists at the UN in New York. "People want a strong Scotland in a strong Great Britain."

"I believe it's the right decision for Scotland, Great Britain and for Europe," he added, saying that Germany hoped to continue working closely with Britain as a trusted partner.

Chancellor Angela Merkel has so far refused to comment on the referendum "out of respect for the democratic decision".

Under the headline, "There are many Scotlands in Europe", Zeit's correspondent in Edinburgh writes that “the result is a warning for Europe,”calling Brussels a “bureaucratic bumbling machine that watches the licking-up of nationalist flames from afar.”

Criticizing Brussel's centralizing of power while attempting to support regional identities, he adds that “the kilt-wearers want to be more than just a folklore club, they want to be a nation, a national community.”

If Europe can emulate Britain's “300 years of progress and peace,” then it might have a chance, he concludes.

Writing in the Frankfurt daily regional, commentator Markus Decker thanks Scots for sticking with Britain, saying that “in a globalized world we don't need more loners, but more cooperation” and warning against nationalism that could see politicians like France's Marine Le Pen swept to power.

Taking a different tack from other German media, Spiegel Online splashed on “A New Start for Great Britain,” calling it a “clearer-than-expected” victory for the "No" campaign and noting that “partners in Brussels and Washington are breathing easy again as Great Britain can continue fulfilling its international tasks”.

In its overview of the consequences, Spiegel reserves special praise for Scottish Nationalist leader Alex Salmond, whose “political talent is recognized with grinding of teeth in Westminster” and who can now, the website claims, become the “conciliator of a divided people”.

Top-selling tabloid Bild's reaction was typically raucous and irreverent, splashing the Scotland result with “Britain stays great!” but poking fun by including the news about St Andrews golf club in Scotland allowing women members in a "second historic Scottish vote".

Like Spiegel, Bild focused on UK Prime Minister David Cameron's speech and his promise of a new draft law with more powers for Scotland and the other regions of the UK in January 2015.

The result of the vote is set to lead the UK to greater federalism and perhaps even to a “German model” of government with more power lying in the regions.

Each of Germany’s 16 states has their own parliament and is governed by a state premier or mayor.

The states have powers over health, education, law enforcement and taxes, while the Federal Government in Berlin maintains control over national issues, including defence, finance, immigration and foreign relations.

This is a model which the Local Government Association in the UK seems to be calling for.

The head of the association, David Sparks, said: “Local areas need to be set free from the grip of Whitehall and allowed to raise and spend money in a way which will best serve the people who live there, from equipping them with the skills for work to being able to build the homes people need.”

European Parliament President Martin Schulz, meanwhile, said on Friday he was "relieved" about the outcome of Scotland's independence referendum.

"I admit, I am relieved about the result," Schulz said on German public radio when asked about the rejection of independence by voters in a historic referendum marked by a massive turnout.

"The next time I meet (British Prime Minister) David Cameron, I'll tell him that I like a United Kingdom in a united Europe," he said.

SEE ALSO: Why some Bavarians want a Scottish 'Yes'

PARTNER CONTENT
How to become a Lord or Lady (and help save the Scottish Highlands)
Url copied to clipboard!