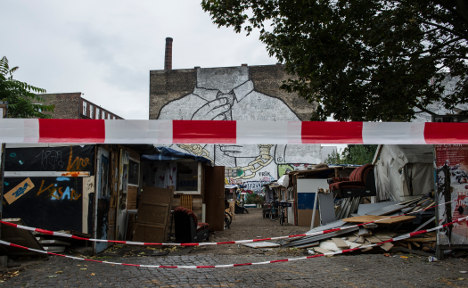 The Cuvrybrache squat on Cuvrystraße in the Kreuzberg area of the city is home to around 150 people, including refugees, Roma and those seeking an alternative lifestyle.

But shacks on the site were destroyed in the fire and police have sealed off the area as a crime scene after Thursday night's blaze.

The fire started when people who lived in the squat started arguing and the row escalated, according to the Berliner Morgenpost. During the argument, petrol was spilled and set on fire.

Police have arrested five men between the ages of 21 and 45 from Poland and Lithuania on suspicion of attempted murder and arson.

The site has been threatened with clearance, but police said on Friday morning they were not planning to clear the squat for good.

According to reports, the owner of the land wants to build riverside apartments on the squat.

SEE ALSO: One of these men will be Berlin's next mayor