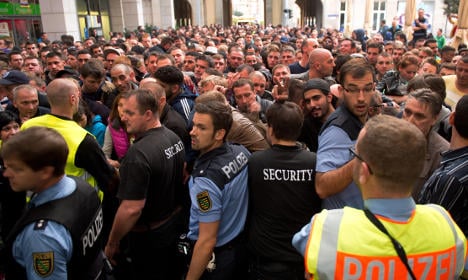 Queues outside the Apple Store in Dresden. Photo: DPA

The customers enduring the longest wait were Helge Bruhn and Phil Gesierich who pitched a tent outside Berlin’s Apple Store on Kurfürstendamm on Sunday morning.

“We wanted to be the first,” Phil told The Local on Tuesday. “I’ve just been listening to music, drinking beer and looking on my iPad.”

By Thursday night they had been joined by a few hundred other Apple enthusiasts who wanted to be the first to get their hands on the new iPhone.

But Helge, 46, was the first customer in Berlin to buy the iPhone 6.

So many people gathered outside the Berlin store on Thursday afternoon that barriers were put up, moving the Apple fans away from the front of the shop and closer to the street.

Hundreds also queued outside stores in Dresden, Munich and Hamburg.

GQ Germany had a photo of the first person to emerge from the Munich Apple store:

In its live blog of the launch, the Abendzeitung newspaper reported that "he must feel like a Hollywood star. With huge applause from Apple employees he's holding up the two smartphones like trophies to the cameras."

One Dresden resident had her hopes of acquiring the new gadget dashed when she arrived at the Apple store:

"The modern iPhone buyer comes with a folding chair," she wrote dispiritedly.

There were similar scenes in Frankfurt as hundreds gathered in front of the shop.

This is the queue outside the Frankfurt Apple Store. Opens in an hour. No iPhone 6 Plus available. pic.twitter.com/tPvnGbjRPl