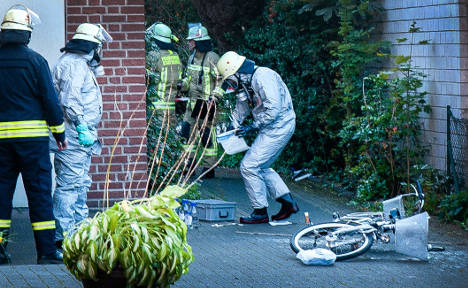 The 39-year-old woman was attacked by her ex-partner at her home in Hövelhof, near Paderborn, North Rhine-Westphalia.

She was flown by helicopter to a specialist medical unit in Bochum and was operated on last night, according to police.

In a statement late on Thursday night, officers said her ex-boyfriend, 38, approached her apartment at around 4.35 pm and threw the acid on her face.

Two other people in the house where the woman lives heard her cries and called emergency services. They were injured by the acid when trying to help her.

Four emergency service workers also suffered minor injuries from the acid. They were taken to hospital.

Police have launched a manhunt but have not yet found the attacker. The man has previous convictions for violent offences.

“We can’t rule out that the perpetrator is armed with a gun or knife,” police said in a statement.

Anyone who sees the car should call police on 110.