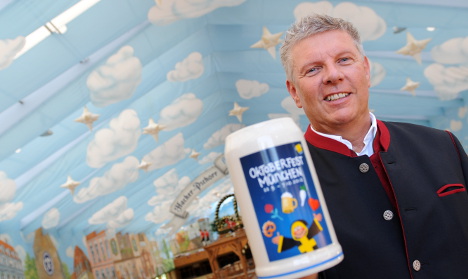 “Three or four strikes. It shouldn't take more,” he told the Abendzeitung newspaper on Tuesday.

His predecessor Christian Ude, who held the town hall for the Social Democrats (SPD) for 21 years, famously became the first mayor to take only two blows to broach the 200-litre cask in 2005.

“I'm planning to keep myself and the people around me dry,” he said.

Out of the blue

He had little political experience before becoming his party's candidate for city mayor, with only a lost council election in 2008 under his belt. And he has only been a card-carrying member of the SPD for three years.

Reiter spent the years leading up to 2014 raising his profile in Munich to catch up with better-known opponent Josef Schmid of the Christian Social Union (CSU).

A lifelong city government employee, Reiter made a big effort to present himself as an ordinary man to voters.

He is self-deprecating about his guitar skills, which he told the Merkur newspaper “make the neighbours suffer”, and plays in a band called Next Generation.

In February, he took to the stage at the 100th anniversary of the Munich Young Socialists – but didn't quite achieve the same crowd reaction as his guitar idol Mark Knopfler of Dire Straits.

While a student, Reiter took weekend and holiday jobs as a painter and decorator to pay his way though university, saving up his pennies to buy a 900cc Yamaha motorbike at the age of 24.

The daredevil biker days are over though as his second wife, Petra, drives a Smart car, while he relies entirely on public transport.

Family life was a major theme of the mayoral campaign, with Reiter making much of his monthly dinners with Petra, his children and grandchildren.

“We spend most of our time in the kitchen,” Reiter told the Merkur. “We often sit [there] together in the evenings and drink a glass.”

The pair have known each other all their lives, as they first met aged just five in the courtyards of blocks of flats in the Munich suburb of Sendling, where they used to play a game called "driving school".

Reiter is, naturally, a Bayern Munich supporter, but dipped a toe of his own into the beautiful game in younger years when he played as a striker for FC Wacker Munich and Ludwigsvorstadt.

He was sitting in the stands last year when Bayern finally beat arch-rivals Borussia Dortmund in the Champions League final – although a trip to London, paid for by the club, made for a minor scandal at home.

Reiter was unapologetic. “I have nothing to reproach myself for,” he told the Süddeutsche Zeitung at the time. “On the contrary – I'm proud to have been there.”

In August Reiter celebrated his first 100 days in the mayoral office after a start which didn't quite go according to plan.

Negotiations with the Green Party failed, forcing him into coalition with the CSU and handing his former rival Schmid the deputy mayor's post.

But Reiter has thrown himself into work on his election promises to modernize schools, build co-operative housing and improve city management, hoping to disprove critics who expect him to be a one-term mayor.

“I'm not unhappy with what we've done so far within the first 100 days,” he said in July.

He's tried to make his leadership of the city distinctive, notably by bringing back a face-to-face “citizen consultation” which has not been seen in Munich since Thomas Wimmer was mayor from 1948 to 1960.

There's one respect in which Reiter won't want to imitate his socialist predecessor: Wimmer was also the originator of the keg-broaching tradition at the 1950 Oktoberfest, creating an event that now stands for closeness to the people and new beginnings.

But unlike the doughty Ude, Wimmer took 19 blows to open the very first ceremonial cask. Reiter has been training this week with master brewer Helmut Huber and believes he can make the jump to the public ceremony without the same difficulties.

The people of Munich will be watching his first public performance closely.

SEE ALSO: The best and worst in dirndl fashion