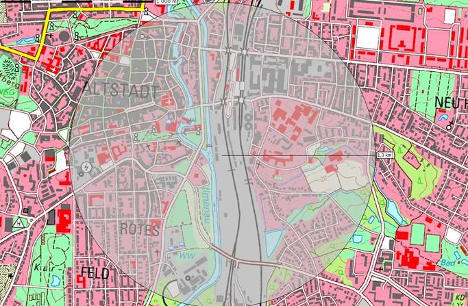 The area of the town centre evacuated. Photo: Lüneberg Stadt

Surveyors working in the Wittenberger Bahn area of the Lüneburg, 50 kilometres southeast of Hamburg in Lower Saxony, uncovered the explosive, dropped by the US military in World War II, late in the evening.

Reception centres were set up for the estimated 11,300 evacuees, who were all out of the area by 9pm.

"The large-scale evacuation in the centre of Lüneburg was a huge effort for everyone involved, citizens, businesses and the emergency services," Lüneburg police said in a statement.

Members of the bomb disposal unit (KBD) were then able to get to work on the explosive.

The team finally managed to defuse the bomb, whose impact fuse had failed to trigger when it landed, at around 1am.

People living within a one-kilometre radius of the find had to be evacuated, which included large parts of central Lüneburg and the old town as well as the train station.

Train traffic was suspended during the defusal.

Around 700 emergency service workers were deployed to tell people about the evacuation and to make sure they left their homes safely.

It was the seventh bomb found in the area this year.