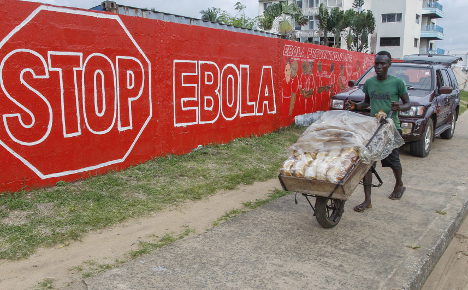 A man walks past an Ebola information mural in Monrovia, Liberia. Photo: DPA

“We will act quickly and stand ready with everything we have available,” Merkel told journalists in Berlin on Wednesday. “The situation in Liberia is in fact very dramatic."

German help to the stricken West African nation could include air transport, secure return flights for doctors and other workers from international organizations, help building hospital wards and support for the World Health Organization (WHO).

A Merkel spokeswoman said earlier that the German army was also examining what kind of help it might be able to offer Liberia.

It comes after US President Barack Obama announced a huge increase in aid to western African countries fighting Ebola, which could involve 3,000 US troops.

Liberia president Johnson-Sirleaf formally asked Germany for help with the battle against the virus in a letter dated September 9th, which was published by Berlin newspaper taz on Monday.

“Chancellor, with the current infection rates only governments like yours have the resources and means to act as quickly as is needed for containment,” she wrote.

“Without more direct help from your government, we will lose the battle against Ebola.”

She asked that Germany help build at least one Ebola treatment centre in the capital Monrovia, as well as helping to re-establish treatment in ten non-Ebola hospitals.

She also asked that Germany continue ensuring the transport of medical personnel and equipment to Liberia as fewer flights travel to and from the country.

Germany has already made €2.7 million available for the Ebola crisis in West Africa and promised €9 million more.

The disease has infected around 4,000 people in western Africa and killed around 2,000.