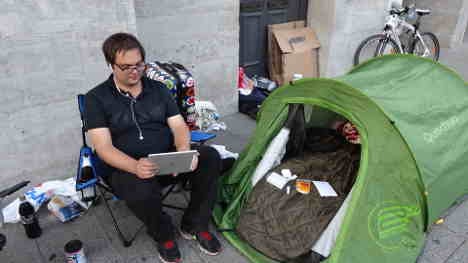 Apple’s latest iPhone, unveiled last week, doesn’t go in sale in Germany until Friday. But Helge Bruhn and Phil Gesierich want to make sure they are the first to buy it.

They pitched a tent and inflated two air mattresses outside Berlin’s Apple Store on Kurfurstendamn on Sunday at 10am.

If they last until Friday on their diet of meals from Burger King and McDonalds and little sleep, then they will have been waiting for the iPhone 6 for 136 hours – a new German record for a wait for an Apple product.

“We wanted to be the first,” Phil told The Local. “I’ve just been listening to music, drinking beer and looking on my iPad.”

The 23-year-old salesman said he had taken a week off work to camp outside the store. “I’ve seen a few things already,” he said. “And I’m pretty tired.”

Phil’s polo shirt is already dirty from a night and a day on the streets, but he has kept up his morale by talking to curious passers-by and trips to a nearby Starbucks.

Helge, 46, and Phil are camping on Berlin’s busiest shopping street and Phil, who said he had been an Apple fan since 2011, is sleeping on an air mattress under the stars as he doesn’t have a tent.

“People come up to us all the time. It’s okay sleeping. The cars aren’t too loud but the buses are quite noisy,” he said. “I’ve also had some cigarettes stolen.”

According to Phil, the previous German record for a wait for an Apple product is around 62 hours, but the two friends will not be writing their way into world record books.

One man waited for ten days outside London Convent Garden’s Apple store for the iPhone 4S.