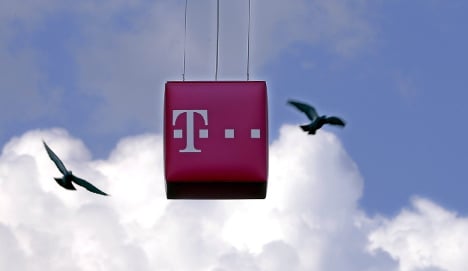 Deutsche Telekom's network can reportedly be accessed by the NSA and GCHQ. Photo: DPA

An NSA programme called "Treasure Map" gives the US agency and Britain's electronic eavesdropping GCHQ near real-time information about the operators' networks, right through to end users on computers, smartphones or tablets, Der Spiegel said in a report on Sunday.

It is the latest in a string of revelations based on documents leaked by former NSA contractor Edward Snowden.

Spiegel said the tracking programme, which it dubbed "the Google Earth of the Internet", can be used to plan cyber attacks.

The magazine said it did not receive any immediate comment from the NSA or GCHQ in response to the claims.

Satellite ground station operator Stellar, which according to Spiegel was among the German firms targeted, responded angrily to the revelation.

"A cyber attack of this kind clearly violates German law," said Stellar boss Christian Steffen, after Spiegel presented it with a GCHQ document said to contain the passwords of some of its clients.

In response to the Spiegel report, Deutsche Telekom and regional operator Netcologne said they had not identified any data breaches.

But Deutsche Telekom's IT security head Thomas Tschersich said: "The access of foreign secret services to our network would be totally unacceptable."

"We are looking into any indication of a possible manipulation. We have also alerted the authorities," he told the weekly.

The Snowden leaks, which began last year and have revealed massive surveillance by the United States, have provoked outrage in Germany and damaged ties with Washington following disclosures that the NSA tapped Chancellor Angela Merkel's mobile phone.