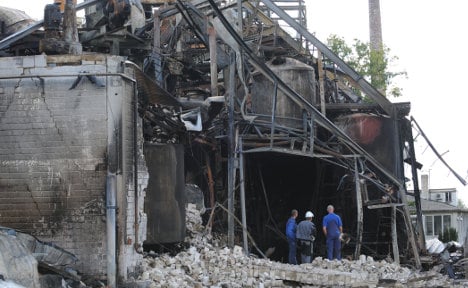 The plant was destroyed in the explosion. Photo: DPA

The most serious injuries were sustained by a 60-year-old who worked for chemical company Organo Fluid.

He was found on the site by emergency services the morning after the blast and taken to hospital.

According to police he died overnight on Monday into Tuesday at a specialist clinic in Hanover.

People in the area had long protested about the facility being so close to their homes. “It is the catastrophe which we long feared,” Ritterhude’s mayor told broadcaster NDR after the fire.

Police said the investigation into the cause of the blast and the clean-up at the site was continuing. A fence has been put up around the site and the fluids are being disposed of. “The investigation into the explosion and fire causes are complicated,” police said, adding that it may take several months to determine the cause.