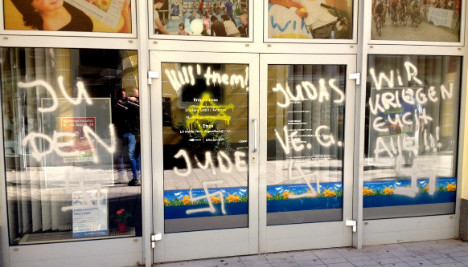 This week vandals sprayed the words "Jews" and the Nazi slogan "Sieg Heil" on the office windows of the Lausitzer Rundschau, a newspaper known for its coverage of far-right groups.

The week before four swastikas were daubed on other offices of the paper as well as "Jews, kill them" and "We'll get you all". There were similar incidents against the daily in 2012.

"These threats and acts of vandalism must be stopped and I am confident that the authorities will take the necessary precautions to ensure journalists' safety," the OSCE's media representative Dunja Mijatovic said.

"I welcome the condemnation of these attacks from the highest level of the German authorities in Brandenburg state and trust that these incidents will be swiftly and thoroughly investigated," she said in a statement.

The chief editor of the newspaper, Johannes Fischer, told the Berliner Zeitung that it would fight back with words which were "the most powerful weapons against spray cans and baseball bats".

Chancellor Angela Merkel will speak at a rally at the iconic Brandenburg Gate in Berlin against anti-Semitism on Sunday coinciding with a World Jewish Congress (WJC) meeting in the German capital.