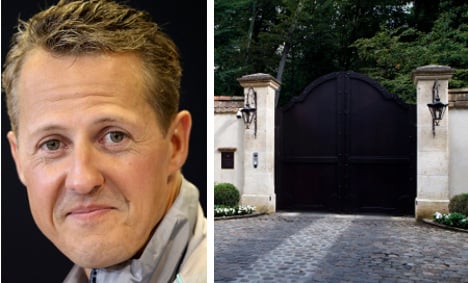 A police spokesman, in the German Formula One legend’s hometown of Gland in the Swiss canton of Vaud, confirmed they had been called when media headed to his villa following the 45-year-old’s release from hospital more than eight months after a skiing accident.

“Police simply had to intervene once or twice, just to make people take notice of traffic problems, because there were journalists who were badly parked, people who were being perhaps a bit too insistent at the gates, but nothing in particular and everything in a very civil way,” the police spokesman for the Vaud canton told The Local.

Schumacher’s home, where he lives with his wife and two children, is being guarded by a private security firm and police said they would not make any “particular deployment” to the house unless called.

“For the moment being, yes [we plan to leave things in the hands of the private security firm]. Of course, the estate, the home of Mr Schumacher is managed by private security,” the spokesman added.

The seven-time world Formula One champion returned home on Tuesday to continue his rehabilitation after suffering a brain injury in December during a ski accident in the French Alps resort of Meribel.

Schumacher was taken from the nearby CHUV hospital in Lausanne to his villa without any medical complications.

His manager has asked for the family to be left in peace and warned there was still a “long and difficult road ahead” for Schumacher.