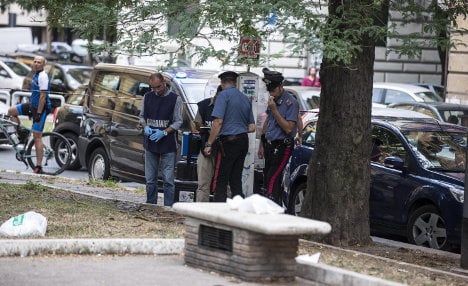 Police at the scene on Wednesday. Photo: DPA

One of the policemen, a lieutenant colonel, suffered knife wounds to his abdomen and thigh and is being treated at the Santo Spirito hospital. Another officer was also admitted to the hospital with multiple injuries, while the other two officers were taken to the San Carlo di Nancy hospital with minor injuries.

The alleged attacker was taken to hospital under police escort at around 8.00pm on Wednesday with wounds to his feet.

Quoted in Il Messaggero, the lieutenant colonel, named as Claudio Rubertà said: “It’s a miracle I’m alive. I was fine, it was a matter of centimetres. If the blade had gone any deeper then it could have been the end.”

A woman working at a pharmacy on the square told Ansa the attack was like a scene from a “detective film”.

“I was really scared. There was panic in the street. I heard a scream and I went outside and saw the policemen running behind the man who had a hammer and was threatening everyone,” she said.

“The chase ended right outside the pharmacy. The policemen were injured and I saw lots of blood, so I gave them first aid bringing disinfectant and gauze to treat the injured policemen.”

Defence Minister Roberta Pinotti, meanwhile, has expressed her solidarity for the four policemen.

“I am worried about the wounding of policemen recently in Rome and I offer them my solidarity. It’s important not to let a climate of hate grow against the police,” she said.