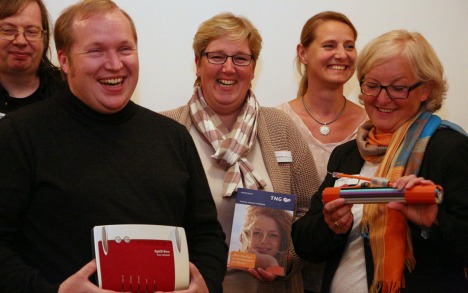 On a Thursday evening in August, about half the residents of Sollwitt, a village of 123 homes nestled in the green fields near Germany's border with Denmark, jammed into the only restaurant in town. They were there to hear how lightning fast internet service was going to launch their village into the future.

"I think in future we will need this bigger bandwidth," said Roger Cattin, a retired computer science professor who moved to Sollwitt a year ago.

"I like it very much that the local people are doing something to get this fast internet to our village."

The project is the latest effort of Bürgerbreitbandnetz, the Citizen's Broadband Internet Company, a small group of locals who took it upon themselves to build a super high-speed internet network in the village of Löwenstedt when Germany's major telecommunications companies turned them away. The group hopes to connect 59 villages in the county by 2021.

"Their answer was no," said Ute-Gabriel Boucsein, head of the village internet startup. "They say the region where we live [in Schleswig-Holstein] is too far away and there aren't enough people."

For the big telecom companies, that meant there wasn't enough money to be made. But for the villagers, it was a matter of survival.

"In 2010, the villages had problems selling land," said Boucsein. "People want to buy, but they ask how fast, how good the internet is and when it's not so good the people don't buy."

Not only do new people not move in, but the young people leave, says dairy farmer Holger Jensen. "Then, when the older people start to die, the village shrinks."

Luckily, Jensen lives in Löwenstedt (population 640) and as of April his farm has been humming along with fibre-optic internet running in the background.

"We use the internet for everything," says Jensen. He monitors the cows' feeding and milk production with an internet-based system and manages the farm's solar and wind power production online.

Before he got broadband, the net was so slow he couldn't even do his home banking on a Monday morning. Now he has a minimum download speed of 50 megabits per second, or about double the average download speed for Germany.

The new expansion project aims to bring that same fibre-optic speed cable, the fastest internet service available, to every home in Sollwitt, vastly improving on the slow and unreliable service the village has now.

"Sometimes it would take me two days to upload a photo album," said Regina Hansen. "I would give up before even trying."

Now that's set to change. The evening event held in late August was organized to give the villagers the opportunity to sign a contract and become investors in the company.

For €999, villagers could become shareholders in the company and provide the money needed to get financing to build the fibre-optic infrastructure.

The Bürgerbreitbandnetz team needs 68 percent of households in the village to sign up. As of this afternoon the company had signed up 72 percent of the homes in Sollwitt. The sign-up deadline is Wednesday night.

With the go-ahead from residents, the company will start putting shovels in the ground on Monday. The team expects work on the new network to be done by December.

Once the network is up and running, those who invested in the company will also start to see a financial return. Bürgerbreitbandnetz rents the internet "pipes" to a local service provider and funnels the income back to its shareholders and its operations.

It might come as a surprise that connectivity would be a problem in a country like Germany, Europe's biggest economy. The village internet expansion comes as German Transport minister Alexander Dobrindt announced funding late last month to bring broadband to all of Germany.

"It's a good first step," says Boucsein about Dobrindt’s plans. "But they have to make a concrete plan for how to do it."

The government wants to connect all of Germany with high-speed internet by 2018, but details for the plan and the funding are scant. The government aims to publish development commitments later this month.

Currently, only 18 percent of Germany's rural homes have high-speed internet. The villagers here aren't waiting around.

In Solwitt, as is the case across the region, it's not only personal internet use that's at stake. A business without a fast and reliable internet connection is at competitive disadvantage in today's wired – and wireless – world.

"We have a bike shop here and we need to order parts and supplies over the internet," said Selina Schoratomsen. "It's important that it goes fast."

Roger Cattin, who was one of the first to sign up to the expanded project, knows exactly how important the project is for Sollwitt. "With this internet the village will be connected with the future."