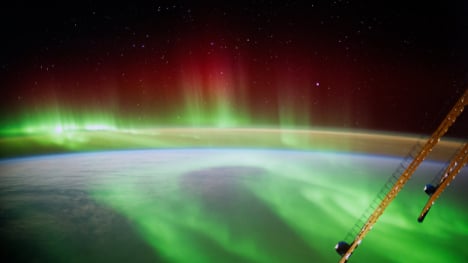 The Northern Lights seen from the ISS. Photo: Alexander Gerst/ESA/NASA/dpa

“You can see how vulnerable the planet is from up here,” Gerst told people in his home town of Künelsau, Baden-Württemberg, in a video chat last week. It was a perspective “we want to bring back down with us,” he added.

Greeting from space to my hometown, Künzelsau! pic.twitter.com/5h4I0NG62F

The video, which had more than 46,000 views on YouTube by Wednesday afternoon, includes images of Eath by day and night as well as a spectacular aurora borealis (northern lights).

Gerst, who has been on the space station since May, is a keen user of social media to inform his followers about his activities on the International Space Station (ISS) and to share photos of the Earth from orbit.

He was able to watch Germany's victory over Argentina in the World Cup Final live with his crewmates on the station and received a few German delicacies on the last European food delivery to astronauts.

A native of Baden-Württemberg, Gerst was selected by the European Space Agency for training in 2009. He has studied all over Germany and in New Zealand and is a former boy scout.

With a doctorate in natural sciences from the University of Hamburg, Gerst has taken part in a variety of experiments aboard the research station.

5 hrs of breathing through a pipe for a better understanding of the human #ENERGY balance @ISS_Research pic.twitter.com/HZCS3oA9MK

The aim of all this outreach seems to be to get his fellow Germans and citizens of Earth dreaming about space once again.

A wave to all children on this planet. Your dreams will shape this world! @UNICEF #BlueDot pic.twitter.com/fnm0mwovx4

Humans are explorers. When will we sail beyond the horizon again? #BlueDot #Moon pic.twitter.com/9dMYTVks9u