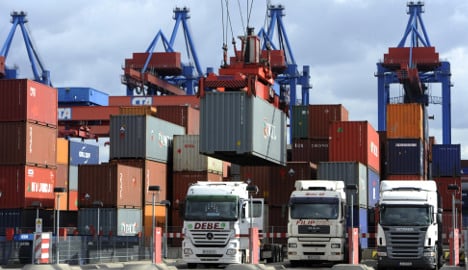 Germany exported goods worth €101 billion in July, up 4.7 percent from the figure for June and an increase of 8.5 percent on last July, the federal statistics office Destatis said in a statement. It was the highest amount of exports ever recorded in a month.

Imports, meanwhile, shrank by 1.8 percent to €76.1 billion.
That meant the seasonally adjusted trade surplus – the balance between imports and exports – increased to €22.2 billion in July from €16.4 billion in June.
Exports to the European Union were up 9.6 percent and exports to the 18-member Eurozone climbed by 6.2 percent, while exports to countries outside Europe soared by 15.9 percent, the data showed.

Following better-than-expected industrial output and orders data last week, analysts said the trade figures augured well for the German economy in the third quarter.
"All in all, data in July indicate that the German economy had a very positive start into the third quarter," said Natixis economist Johannes Gareis.
"Thus, although it is early days, the data suggest that Germany will refire its engine in the third quarter and avert a technical recession," he said.
In the second quarter, German gross domestic product (GDP) had contracted by 0.2 percent.
BayernLB economist Johannes Mayr said that any weakness in exports to Russia and Ukraine had been more than offset by exports to other countries.
"The pick-up in the US economy will have also played a role," Mayr said.
Manufacturers also saw turnover rise by one percent in July compared to June.
Destatis also reported on Monday that labour costs in the second quarter in Germany rose by 1.7 percent on the same period in 2013.
SEE ALSO: Germans work most overtime in Europe