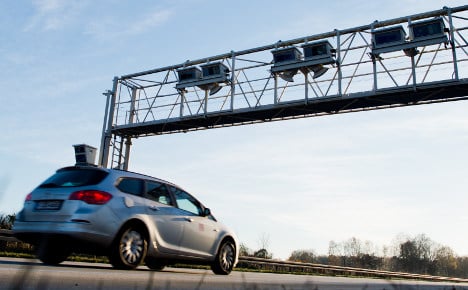 The sight of toll gates on Germany's roads might still be some way off. Photo: DPA

CDU state federations in North Rhine-Westphalia, Baden-Württemberg and Rhineland-Palatinate are campaigning for roads near borders to be exempt from the toll so as to avoid discouraging tourists from neighbouring countries.

But they have found themselves in conflict with their allies, the Bavarian Christian Social Union (CSU), led by Horst Seehofer.

Seehofer accused Finance Minister Wolfgang Schäuble of sabotaging the toll after an analysis criticizing the plans introduced by Transport Minister Alexander Dobrindt was leaked from the Finance Ministry.

“This solidifies my suspicion that the Finance Minister will do anything to hinder these plans,” Seehofer told the Süddeutsche Zeitung on Sunday.

The Finance Ministry is concerned that Dobrindt has underestimated the costs of introducing the toll, potentially leaving too little money available in future for maintaining the roads.

But Dobrindt told an audience in Abensberg, Bavaria, on Monday that he would not be changing his plans. "It is clear that the toll brings a return – a significant return,” he said.

He added that he would clear up as many questions from the plan’s critics before a draft bill went to the Cabinet. The transport minister said he aimed to present a draft bill this year.

“By the end of the year, everything will be sorted out, and I believe everyone will be happy then,” he said.

“We are for a toll, and the toll will happen. And it won't cause economic damage in border regions.”

The toll would work by charging everyone who drives on German roads up to €100 a year and then deducting this amount from the road tax which Germans already pay, meaning that foreign motorists would have to start paying.