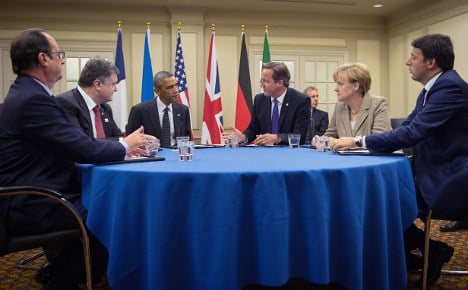 The Western defensive alliance agreed on Friday to the creation of a "spearhead" force to deter possible Russian aggression against its Eastern members.

It will consist of between 3,000 and 5,000 soldiers and be capable of deploying within two to three days. Weapons, vehicles and equipment will be stockpiled in countries where they might be deployed, allowing the troops to travel light.

Integrating German soldiers into the Nato "spearhead" may be difficult, as the Bundestag has to approve any deployment of military forces overseas, a process which usually takes longer than a few days.

Chancellor Angela Merkel had maintained her “double strategy” of firmness and dialogue at the opening of the alliance's Wales meeting on Thursday in the face of aggressive language from Russia.

Moscow's Foreign Minister Sergei Lavrov told Russian media that any country calling Ukraine's neutrality into question would endanger the effort to find a peaceful solution to the crisis.

But the Chancellor said that the alliance would maintain its solidarity in the face of the conflict and was prepared to introduce further sanctions against Russia.

“We want a political solution,” Merkel said. “We are of course ready to speak with Russia about that.”

Merkel called her “double strategy” of firmness with openness to dialogue “the key to success.”

The Chancellor also said that Nato would honour its existing treaties with Russia, especially the founding treaty of 1997 which forbids it from stationing significant numbers of troops in the territory of its Eastern European member states.

Meanwhile, US Secretary of State John Kerry convened a meeting of a "core coalition" of 10 nations on Friday to discuss tactics to fight terror group Isis on the sidelines of the conference.

The coalition, which includes Germany, will need to "prevent [Isis] from taking over territory, to bolster the Iraqi security forces and others in the region who are prepared to take them on, without committing troops of our own," Kerry said.

Germany has already begun delivering military supplies, vehicles and weapons to Kurdish Peshmerga fighters in northern Iraq, who have found themselves on the front lines of Isis' rapid territorial expansion.