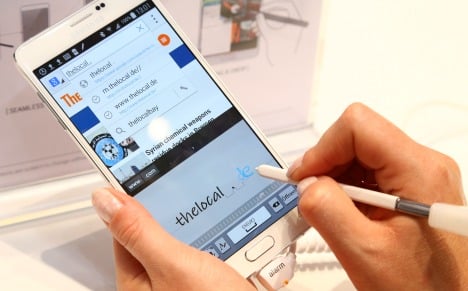 Using the Samsung S-pen to write in the The Local Germany"s web address. Photo: Thomas Urbina

Crowds poured into the brand new City Cube Berlin to ogle the latest offerings from global electronics giant Samsung. With the new building all to themselves, Samsung blanketed visitors in a blue and white glow, showing off products as diverse as vacuums, washing machines and ovens to smartphones, virtual reality helmets and giant bendable televisions.

There was hardly anything Samsung didn't have its high-tech fingers in.

Fitting, then, that Samsung CEO BK Yoon had the honour of delivering this year's keynote speech to a packed house.

Yoon expects there to be 45 million smart homes in the world by 2018.

Tech dystopians may have only to look around their kitchen for the next fictional inspiration.

Kent Larson of MIT"s Media Lab showed how his team in Massachusetts is trying to develop a new paradigm for urban housing.

"The young people that the world"s innovation hubs are trying to attract are being priced out of the market," said Larson, joining Yoon on stage.

Larson is working on apartments built for cities with increasing density, where a bedroom becomes a living room, becomes a party room simply through design that makes the most of the space and using technology to automate the transformation of a room.

Beyond the Samsung bubble

Outside the City Cube, hundreds of exhibitors filled the halls of the Internationale Funkausstellung, as the trade show was originally called when it was founded as a radio exhibition in 1924.

Last year the show attracted about 240,000 visitors, who buzzed through the 1,500 exhibitor booths. The industry showcase is open to the public, unlike its counterpart, the Consumer Electronics Show (CES) in Las Vegas.

IFA features the best of home entertainment, appliances, communications tech and media technology as well as tech components for commercial and industrial use.

Vacuums won"t save the world, but energy efficiency might help

Germany"s vacuum-makers were out showing off their latest models. On September 1, new EU regulations on the energy efficiency of vacuums came into force. All vacuums brought into the EU must now use a no more than 1600 watts of power.

German manufacturer Sebo said its machines are capped at 1200 watts, though the global market leader with cleaning contractors whose vacuums clean the floors of Buckingham Palace, said the next phase of the regulations will be more of a challenge.

In 2017, vacuums brought into the EU will not be allowed to draw no more than 900 watts.

Alena Krazewsky, Sebo"s head of marketing, said she thinks it"s a positive step, but wonders how much of an effect it will have.

Still, energy efficiency is a theme of the show, especially given the focus on the smart home.

The combined exhibition of three of Germany"s electrical and electronics industry and trade associations (VDE, ZDEH, ZVEI) is sure to impress as visitors have the opportunity to walk inside a model smart home layed out in a 100m2 space.

All controlled via smartphone or tablet, the model home"s entertainment systems, energy management and LED lighting are intended to show how "improved energy efficiency can go hand in hand with comfort and safety," especially when it comes to the elderly.