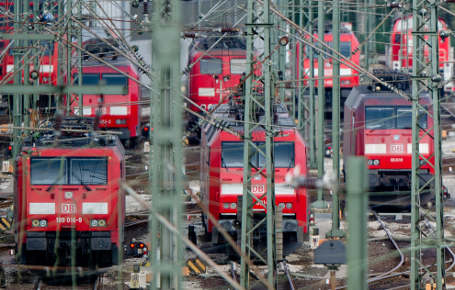 Locomotives backed up in Maschen, Lower Saxony, during Monday's warning strike by drivers. Photo: DPA
Passenger and goods trains will not operate between 6 a.m. and 9 a.m. on Saturday, the GDL drivers's union said during its continuing battle to secure a five-per-cent wage increase and a two-hour cut to the working week.
The union staged a similar short strike on Monday which mainly concerned goods services but severely disrupted passenger services too.
Since there had been "no movement whatsoever" by Deutsche Bahn to compromise, all drivers and train staff were urged to support the industrial action, GSL chief Claus Weselsky said on Hessen Radio.
The union was considering ramping up the action, Weselsky added: "Next there will be a general vote on a regular weekly work fight."
Described by organizers as a "warning strike", the walkout will also affect S-Bahn services in Berlin and Hamburg. U-Bahn underground services will not be affected apart from by additional numbers of passengers.
A second strand in the dispute is Deutsche Bahn's demand that GDL sign a cooperation agreement with its own in-house union EVG. The two unions are currently in conflict over which groups of personnel they should represent.
"No one understands the sense of this strike, apart from the fact that one union wants to take turf from the other," said Deutsche Bahn personnel director Ulrich Weber.
Regarding wages, the railway management had offered 1.9 percent wage increase instead of the five demanded by GDL. But first the unions had to settle their in-fighting before the wage issue could be resolved, Weber said.
Meanwhile, around 200 flights were cancelled during Friday's six-hour strike by Lufthansa pilots at Frankfurt airport in their struggle with the national carrier over retirement and pension terms. It was the second strike in two weeks running.