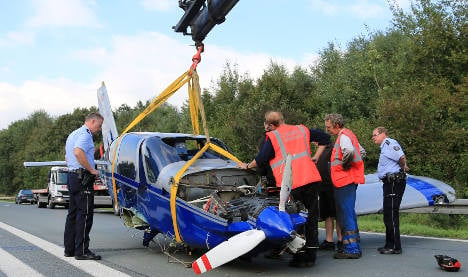 A crane removes the wrecked aircraft on the A43. Photo: DPA

The 62-year-old pilot was bringing the four-seater Socata TB10 into the Loemühle aerodrome on Wednesday when a sudden loss of power forced him to abort the landing, the Marl Zeitung newspaper reported.

As he tried to swing the aircraft around for another approach it went out of control and plunged into the undergrowth beside the A43 motorway 26 kilometres north of Bochum, narrowly missing traffic.

The man from Bochum, who was flying the plane alone, was only lightly injured and could climb out of the wreck unassisted, police said.

Northbound traffic was backed up for five kilometres while emergency services used a crane to remove the damaged aircraft.