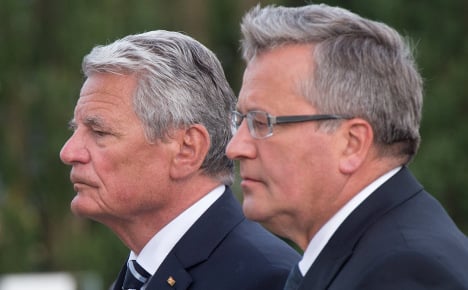 "We want partnership and good neighbourly relations [with Russia]" but on the condition that Moscow changes its policies and that there is a "return to respect for the rights of nations", Gauck said at a ceremony in Gdansk to mark the 75th anniversary of Germany's invasion of Poland that set off World War II.

Invoking the "miracle" of post-war reconciliation between Germans and Poles, Gauck said he was disappointed with the turn of events in Russia.

"We believed and wanted to believe that Russia too, the country of Tolstoy and Dostoevsky, could be part of Europe."

"It was a shock when we were confronted with a new conflict on Europe's borders. An armed conflict aimed at establishing new borders and a new order. It's a fact, stability and peace on our continent are once again endangered,"he added.

Following the end of the Cold War, "the EU, NATO and major industrialised states developed special relationships with Russia and integrated it indifferent ways. Russia has effectively severed this partnership," he said.

Gauck came in for criticism on Tuesday from Left party chairman Bernd Riexinger, interviewed by Handelsblatt.

"A German government leader pouring oil onto the fire of a European conflict on the anniversary of the outbreak of war shows little historical sensitivity," Riexinger said. "This undermines all the effort to calm the Ukraine conflict."

Polish President Bronislaw Komorowski, who spoke before Gauck, called for"courage and determination" in opposing "those who threaten the international order, peace and freedom".

Earlier in the day, Poland's Prime Minister Donald Tusk warned war could spread beyond eastern Ukraine and called for a "practical dimension" to European and euro-atlantic solidarity ahead of this week's key NATO summit that could see the alliance boost its presence in ex-communist members states.