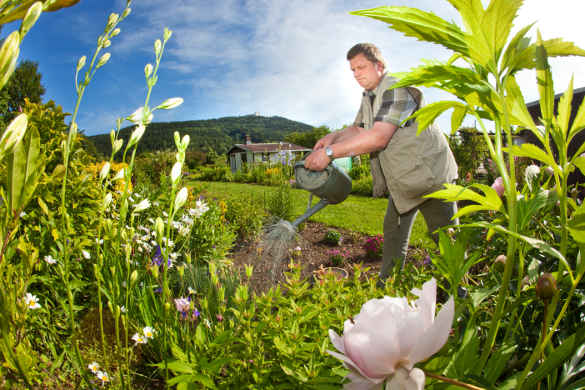 Life's not all roses on the allotment. Photo:DPA

It was the last of many clashes over noisy gardening equipment which had previously led to stones being thrown and pitchforks brandished. Finally a 68-year-old tenant climbed over the fence and set about his neighbour's chugging lawn mower with a plank. The owner, 61, fetched an unlicensed pistol and shot him dead.

The court hearing that opens in Trier on Thursday is the latest instance of what might be called 'garden rage' over claimed contempt of neighbours for rural peace and order.

"This [allotment ] was his life," said widow Monika Hölzmer, who has set up a small shrine in the garden in memory of her husband.

An even deadlier eruption of the allotment wars occurred in 2008, when a 66-year-old man in Lower Saxony used a wooden club to kill his 33-year-old neighbour and the man's parents after a long dispute over the dumping of garden waste over his fence.

A Hildesheim court heard how the defendant saw himself as "inspector of the other garden owners and visitors" and would dictate allotment regulations to perceived violators. He was sentenced to life imprisonment for the murders.

Extreme cases, but indicative of the fragile calm of some allotment communities, where plots adjoin each other, trees grow uninvited over fences, and blaring radios are not everyone's cup of green tea as they commune with nature.

After all, the purpose of today's Kleingarten (small garden, or arbour) is generally no longer to grow food to survive, but to help offset the stresses of modern life.

Back to grass roots

This is especially true in allotments within city limits, which are a “substitute paradise” for apartment block tenants, believes Hartwig Stein, a historian who loved the garden culture so much that he completed a doctorate in the subject in 1998.

“Small gardens conserve the old cyclic life of the farmer in miniature form, right in the middle of town,” Stein wrote earlier.

And many people have sought out that substitute paradise. The Federal Association of German Garden Friends groups some 15,000 small garden clubs with around a million plot-tending members.

The roots of the allotment culture stretch back to the mid-19th century, when authorities distributed small plots to impoverished town citizens to grow their own food after the Napoleonic wars.

But while the history is clear, the modern function of the leased allotments and the definition of reasonable regulation is often still not.

But like it or not, the demographics are changing. According to the Federal Office for Building and Regional Planning, almost two thirds of new lease holders from 2000 to 2013 were under 55. Numbers of families taking plots have also grown, in part due to the rising popularity of the 'Bio' fashion for home-grown fruit and vegetables.

The younger blood arriving might find the regulations overly restrictive. According to extensive tenancy laws, leased plots may not exceed 400 square metres. Summer houses may not be larger than 24 square metres or be fitted for extended habitation.

At least one third of the ground should be given over to cultivation of fruit and vegetables, which may not be sold commercially. Hedges around the plot must be trimmed and cannot be more than 1.25 metres high, because, as Garden Friends notes, "a small garden is a private use of public land," and views of the area should not be obstructed.

As in towns, there is a stipulated "quiet period" between one and three p.m. when power tools and other loud equipment cannot be used. And hush must prevail after 10 p.m.

Then some zealous garden associations add more rules, even including requirements for tenants to grow their vegetables in neat lines.

Retired doctor Annemarie, 76, had to defend herself in court when a neighbour at her 320 square-metre plot in Potsdam tried to have her prosecuted under the Small Garden Law for cultivating less than a third of the plot with fruit and veg.

She also specifically complained that her neighbour's potato beds were ill-aligned and therefore untidy.

A district judge visited the plot to assess the claim in the presence of both parties and their lawyers. The judge established that cultivation proportions were correct and later notified the sides in writing that the case had been rejected. She also added that "nowhere in the Small Garden Law does it say vegetables must stand in military rows," the doctor recalled with a laugh.

The neighbour then took the case to a Brandenburg state court, which promptly threw it out. Allotment expert Stein also says some associations have gone over the top regulating what he says is already a demanding task of keeping the cycle of life turning on the plot.

There’s no need to place a tight corset on nature all the time, argues Stein, who advocates “more turned over soil, wild growth and higgledy-piggledy arbour communities.”

Of course, even when tempers get frayed over the fence, only a handful of tenants will resort to violence.

But frictions can snowball out of all proportion over time, as Andreas Ammer, the lawyer of the 61-year defendant in the Trier murder case, told media.

“Feelings were so bitter that this took on a momentum of its own,” he said.