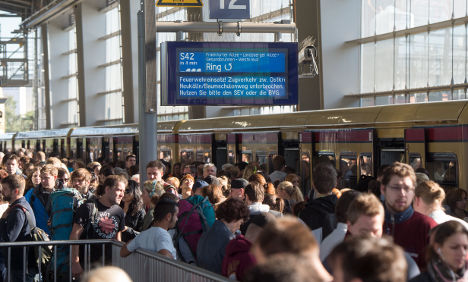 Passengers at Berlin's Ostkreuz station yesterday as information screens relay news of the disruption. Photo: DPA
The blaze at the Treptow Park station in the south east of the city early Thursday was carried out using gasoline and two timed detonating devices, according to a statement posted on the linksunter.indywelt website and attributed only to  'independent groups'.
The credibility of the statement was being evaluated, Berlin police spokesman Michael Gassen told The Local. The investigation into the fire was ongoing but there were still no concrete leads, he said.
Authorities had already stated yesterday that the fire had been started deliberately.

The group claimed to have carried out the attack to highlight the plight of a group of refugees who since Tuesday have occupied the roof of a nearby building in their efforts to remain in Germany.

Just a few metres away at the S-Bahn station, "dozens of people stand here daily, lined up and lethargic, waiting for their train to work, school or shopping", said the statement.
"Not a thought is spared for the people who must leave their homeland because of the poverty and war caused by German greed for profit," added the text titled 'Fire and flames for Berlin!'
The fire attack drew sharp condemnation from both sides of Berlin's governing coalition.
"The independent left-wing scene wants to terrorize and oppress the city centre," said Tom Schreiber, the centre-left Social Democrats' (SDP) spokesman for protection of the Constitution.
"This is an assault on our shared life that is obviously intended to harm and cause anxiety," added Frank Henkel, the centre-right Christian Democrats' (CDU) city senator for security.
The website on which the statement was published also features details of earlier acts of vandalism against the capital's transport network, which left-wing activists claim exemplifies the class divide with its rising fares and rigorous campaign against fare dodgers.
A 2011 arson attack with timed incendiary devices that caused damage at several railway sites was carried out by unidentified perpetrators who were protesting against the war in Afghanistan.
While not believed to have any connection with the radical group claiming responsibility for the arson attack, dozens of refugees from African and Asian countries have mounted a series of highly visible protests in recent weeks. Aimed at drawing attention to their limbo state in Germany, actions included the occupation of the revolving café at the top of Berlin's television tower in July.
The latest rooftop protest action by around ten men has resulted in police cutting off electricity and water in an attempt to dislodge them.
Meanwhile, thousands of travelers had to use alternative routes on Friday amid continuing widespread disruptions due to the fire damage .
There is currently no service between Ostkreuz and Neukölln. Lines expected to be affected until Sunday are the S8, S85, S9, with service reduced to every ten minutes on the S41 and S42 ring lines.
Connections to other U- and S-Bahn lines are available at all other stations on the southern half of the Berlin ring, and replacement buses were also operating from some stations.
SEE ALSO: Arson attack causes Berlin train chaos