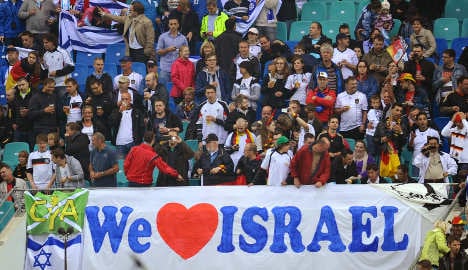 German and Israeli fans cheer in the stands during a friendly in Leipzig in 2012. Photo: DPA
The game had been scheduled for March 25 but was cancelled at the request of Israel, the DFB announced on its website.
The move resulted from "postponements in the calendar arising from the recent  developments of the conflict in the Middle East and resulting security conditions."
Israel's European Championship qualifying game against Belgium, planned for September 8, was also put back to March 25 because of the conflict between Israeli forces and Hamas militants in Gaza.
"This is naturally very sad for us," DFB president Wolfgang Niersbach said about the cancellation of the goodwill game. "But it was clear that we had to meet the request of our Israeli friends."
Expected to be played in Jerusalem or Haifa, the match was intended to be "another signal for the close ties" of the two countries, Niersbach said before the cancellation request.
Die Mannschaft has played twice before in Israel and won both matches. Israel has twice visited Germany and lost on both occasions.
The German team had been due to travel directly from Israel to Georgia for a Euro 2016 qualifying match on March 29.
The friendly could possibly be rearranged for the second half of 2015, according to the DFB chief.
UEFA, Europe's governing body for football, had also previously objected to the original September 8th date for the Israel-Belgium fixture because of security risks resulting from the Gaza violence.