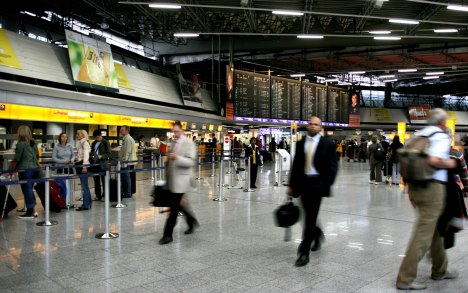 Inside the terminal at the Frankfurt International Airport. Photo: Shutterstock

From 2003 to the end of 2013, Germany topped the list of countries whose professionals have sought to relocate and be accredited in other European countries, with 45,175 licensed professionals trying to establish themselves around Europe, mainly in Switzerland and Austria.

Germans also enjoyed the one of the highest rates of recognition around Europe, with 89 percent of professionals like doctors, nurses, teachers and architects being accredited outside Germany.

The highest rate was Sweden with 93 percent, but more than three-quarters of the migration of licensed Swedish professionals was to Norway.

The same levels of success did not materialize for other European professionals trying to establish themselves in Germany. Europe's biggest economy accredited only 57 percent of the licensed workers seeking work in the country, or 22,339 people, the lowest level in Europe.

Still, Germany remained one of the most sought-after destinations for professionals in Europe, after the UK and Norway, though – again – almost half of the professionals Norway attracted came only from Sweden. The UK- and Germany's brain gains were notably more geographically diverse.

Overall, however, Germany suffered a brain drain, with nearly 6,000 more accredited workers leaving the country than coming in. The data does not account for professionals who returned to their home countries.

In Germany, doctors were also the most mobile profession and went overwhelmingly to Switzerland (58%), arguably because of the shared language and the potential for higher salaries.

Switzerland is home to a large pharmaceutical industry, which produces nearly 6 percent of the country's gross domestic product, according to the industry association.

The UK came in a distant second as a destination for German doctors.

Nurses, Germany's second most numerous professional expats, went mainly to Switzerland (37%) and Austria (31%). Physiotherapists were the next large group with architects, pharmacists and electricians rounding out the top 10.

The top three exporters of licensed professionals to Germany over the 10-year period were Poland, Austria and Romania.

But both Romanian and Austrian professionals had relatively high rates of recognition in Germany, each at about 70 percent, whereas Polish professionals were only approved in 37 percent of cases.

High school teachers came in the greatest numbers to Germany over the last 10 years. The three biggest contributor countries were Austria, Poland and Spain.

But only about a quarter of those teachers were accredited, with the professional fate of 72 percent still hanging in the balance because of appeals, "adaptation periods" or review processes.

This week Germany announced measures to crack down on EU immigrants who may be abusing social welfare benefits.

But Labour and Social Affairs Minister Andrea Nahles stressed that many of the newcomers from eastern EU countries are skilled workers, often doctors attracted by better income prospects in Germany.

Doctors from Romania and Poland moving to Germany have nearly all had their qualifications recognized. However, when it comes to the other large groups such as nurses and high school teachers, recognition levels drop well below 50 percent.

The announcement on Wednesday did not mention Germany's licensed professional recognition rates.