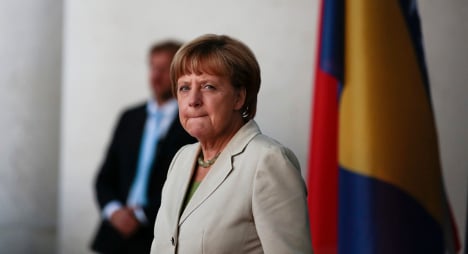 "We have received reports of an increased presence of Russian soldiers and new unrest and advances by separatists in previously very quiet areas" of Ukraine, Merkel said.

The unrest would be the subject of an EU summit in Brussels on Saturday, she said, adding that since March this year, "we have repeatedly made clear… that in case of further escalations, naturally new sanctions will have to be discussed".

Speaking to the media after a Berlin meeting with Balkan leaders, she said the Ukraine crisis "will be on the agenda of the council, and we will just have to ask 'how will we react?'"

"I want to say again… we want a diplomatic solution, and we will not let up on this, but we have to acknowledge that things have become more difficult and worsened again in recent days."

Merkel later spoke with US President Barack Obama about the situation on the phone, the government announced in a press release.

The pair agreed that such behaviour couldn't go unchallenged by the West.

They will have an opportunity to discuss the crisis in person next week at the NATO summit in Cardiff.