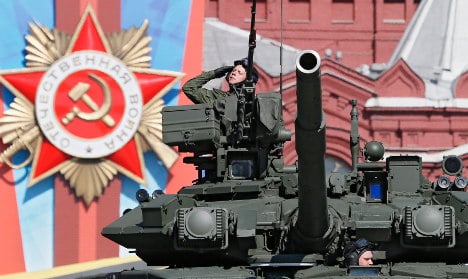 A Russian tank at a military parade in Moscow in May. Photo: DPA

Karl-Georg Wellmann, a foreign policy expert for the Christian Democratic Union (CDU), said on Thursday Russian troop movements in Ukraine showed Russia was trying to establish a land strip in the south of the country via Odessa to the breakaway republic of Transnistria in Moldova.

He called for further sanctions against Russia and more Nato troops to be stationed in eastern member states.

“Russia is showing itself to be a country which doesn’t adhere to European norms and uses military force to achieve foreign policy objectives,” he told Handelsblatt Online.

Merkel, who held a conference in Berlin on Thursday on the west Balkans, earlier called for an explanation from Russia's President Vladimir Putin amid the reports of an incursion by Russian soldiers.

Russia has responded by denying an invasion, but Nato believes at least 1,000 Russian troops are operating in the country. Pro-Russian separatists are now making gains in the south of Ukraine, opening up a second front in the war.

“She was pretending that both sides were not much more than concerned neighbours. In combination with sanctions, this was supposed to provide Putin with an exit option – the possibility to step back and to accept that he cannot 'own' Ukraine,” he wrote on Facebook.

“The West hasn't much choice but to step up sanctions. The US and the EU have from the beginning ruled out military involvement on the side of Ukraine. Economic pressure is the only tool it has.

“And the German approach now looks like a failure. It was worth trying nevertheless. And it may have minimized Russian involvement in the last months, it may have led Putin to take a low profile.

“But given the latest developments on the ground, to pretend that Russia is nothing but a concerned neighbor starts to become impossible.

“Putin wants back control over Ukraine, or at least prevent the emergence of a successful, democratic, western-oriented neighbour.

“The West has no Plan B. Merkel's tactics of using carrots and sticks had the great advantage that it was 'sellable' domestically: to her coalition partner in Germany, the SPD, and in the EU to countries like France, Spain and Italy which are muss less concerned about Russian neo-imperialism than Germany or Poland is.

“A more robust tactic by contrast won't fly in Germany or in the EU. Everything that looks as if it increases the risk of direct military confrontation with Russia is going to be vetoed immediately.”

Nato is holding a summit in Wales next week where it will discuss its response to the crisis. Merkel is expected to attend along with leaders and ministers from 60 other countries.