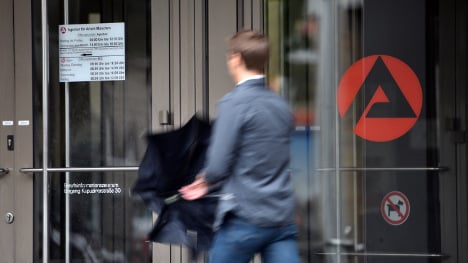 The unemployment rate stood at 6.7 percent in August after adjustment for seasonal blips, the same rate as in July.

But the number of people registered as unemployed edged up by 2,000 to 2.901 million, the Federal Labour Office said in a statement.
This was unexpectedly bad. Analysts had been pencilling in a decline this month of about 5,000.
Following the 0.2-percent decline in gross domestic product (GDP) in the second quarter, "the signs for the third quarter are also very subdued. Developments on the labour market, however, are still moderately positive," the labour office insisted in a statement.
"The German economy shrank in the second quarter. Weak exports and investment could not be offset by stable consumption, which means that the continual growth seen in the preceding four quarters was halted," the statement said.
"External economic uncertainty is having an increasing effect, notably the conflicts in the Middle East and Ukraine," the office continued.
In raw or unadjusted terms, the German jobless total rose by 30,472 to 2.902 million and the unadjusted jobless rate edged up to 6.7 percent from 6.6 percent, the office calculated.
Economic rough patch
Analysts saw the latest German data as no great cause of concern, at least for now.
"Germany's buoyant labour market has remained largely unaffected by the external uncertainties and the swings in economic output so far this year.
While unemployment may have troughed, job creation remained robust so far," said Berenberg economist Christian Schulz.
However, while the fundamentals for household spending remain strong, "the latest decline in consumer confidence does suggest that the uncertainty emanating from the crisis in Eastern Ukraine is also making households more cautious, signalling that spending could weaken at least temporarily," Schulz said.
"A decline in the hiring intentions index … suggests that the economic rough patch may also catch up with the labour market," he added.
Postbank economist Heinrich Bayer also believed that "as long as growth gets going again after the weak second quarter, the situation on the labour market will not change."
But if the geopolitical risks push the German economy into a "longer period of doldrums, then that will begin to make itself felt on the labour market by the end of the year at the latest," Bayer predicted.
Natixis economist Johannes Gareis said that "although the German job market is not immune to setbacks, (it) is unlikely to feel a lower economic growth trend, which is looming ahead according to the recent economic news flow.
"We expect private consumption to remain an important pillar for Germany's growth in the remainder of this year," Gareis said.
IHS Global Insight analyst Timo Klein insisted that "overall, labour market conditions remain much healthier in Germany than in most other countries in Europe."
All in all, "underlying German economic growth will remain fairly healthy despite the uncertainty stemming from the Ukraine crisis, as eurozone crisis related uncertainty has conversely declined," Klein concluded.
SEE ALSO: Study shows poverty isn't the same old story